Before Batman became the legendary vigilante superhero who fought for justice in Gotham City, he fell down a well and became trapped among bats who called it home. Bruce Wayne then took his fear of bats and turned it into a symbol of strength—and why not? Bats are amazing and provide us with ecosystem services ranging from biological pest control to pollination and seed dispersal. They’ve also aided in advancing the areas of medicine and technology with anti-coagulants (thank you vampire bats) and improved airplane flight design. Not to mention they’re responsible for bringing us foods such as cocoa, bananas, and mangos, and pollinating the agave plant used to make tequila.

Unfortunately, due to a combination of popular culture, myth, and ignorance, bats have gotten a bad rap. Now, the creatures of the night we so heavily depend on need our help more than ever. Since its discovery in New York in 2006, researchers have been tracking the westward spread of the deadly fungus Pseudogymnoascus destructans (Pd), otherwise known as White Nose Syndrome or WNS. The fungus was carried on the clothes of a researcher or spelunker who had previously walked through a Pd-positive site in Europe whose bats, incidentally, are resistant to the fungus. 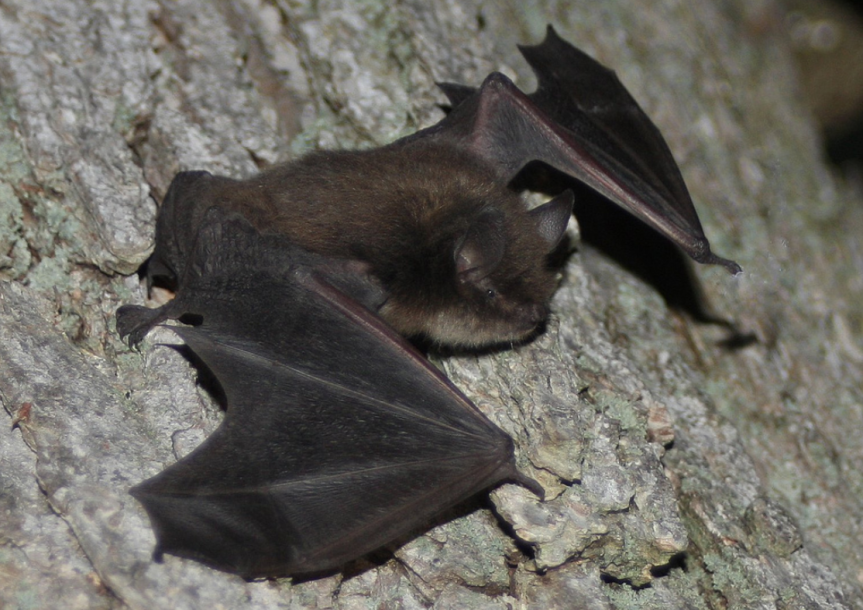 The temperature and humidity in caves support the growth and reproduction of Pd, which grows as a white fuzz (thus the name), on the nose, ears, and wings of bats. During hibernation, many species can be found clustering tightly together, increasing the rate of spread of WNS. During this time, bats typically wake for very short periods of time to drink water and groom; however, the fungus irritates the bats causing them to wake more frequently resulting in a rapid loss of stored nutrients meant to carry them through winter hibernation. Infected and starving, bats are often found flying during cold winter days to seek non-existent insect prey before either succumbing to hunger or the cold and freezing to death.

To date, caves in the U.S. and Canada have experienced a 90-100% decline in hibernating bats resulting in an estimated 5.7 million bats lost to the disease (whitenosesyndrome.gov). One species, the Northern Long-Eared Myotis (Myotis septentrionalis), which is found in Wisconsin, was the first to have been placed on the endangered species list due to the impact of White Nose Syndrome.

In 2014, WNS made its way across the Great Lakes, and has since been found in eight Wisconsin counties including Dane, Grant, Door, and Iowa where it was first detected. Winter surveys for the 2015-2016 season have not yet been released, but will likely indicate further spread throughout the state. Wisconsin has eight species of bats, half of which utilize caves and mines for overwintering and are listed as threatened in the state, while the other four are on a ‘watch list’. Of the four threatened species, Little Browns (Myotis lucifugus), Northern Long-Eared bats (Myotis septentrionalis), and Eastern Pipistrelles or Tri-Colored bats (Perimyotis sublavus) are more heavily impacted due to their small size. Big Brown bats (Eptesicus fuscus), while also vulnerable to WNS, have a slight advantage in size over the other three and therefore have shown moderate resistance to the fungus. Unquestionably, losses will be felt hardest in the agricultural sector of the state.

In Wisconsin, the Department of Natural Resource’s Wisconsin Bat Program monitors and manages our state’s bat populations. According to John Paul White, a conservation biologist with the DNR, research suggests that bats could save the agriculture industry more than $3 billion dollars in pest control each year by eating insects. He added that further research estimated the economic value of Wisconsin’s bats to be between $658 million and $1.5 billion.

The devastation of WNS in New York was undeniable, and ignited a torrent of research and monitoring efforts east of the Mississippi River. State and federal agencies teamed up with researchers and nonprofits from around the country and scrambled to gather data on the diversity and population abundance of their bats in order to estimate WNS-related losses in the near future. Overwintering sites were located, censuses conducted, and swabbing for the fungus ensued.

In Wisconsin alone, more than 150 bat hibernacula were identified during the winter of 2010-2011. According to White, the four cave bat species were classified as threatened in Wisconsin due to the threat of WNS, “which afforded protections against direct killing, transportation and possession.” Additionally, Pd was added to the prohibitive invasives list under Wisconsin’s invasive species rule, which, in conjunction with decontamination protocols, may help slow the spread of WNS by cave enthusiasts, researchers, rehabilitators, and pest control operators.

Currently, there are several treatments for WNS being field-tested that are immensely promising. However, due to the unique and fragile nature of the cave ecosystem, these treatments must be found to have negligible impacts on other cave-dwelling organisms in order to be applied.

There’s good news though—you don’t have to be a researcher to help save Wisconsin’s bats! Here are some tips from the DNR’s Wisconsin Bat Program, to help protect our state’s bat population:

Finally, for more information about WNS, to report unusual bat activity, or to donate to and get involved with the Wisconsin Bat Program, please visit http://wiatri.net/inventory/Bats.

This work is licensed under the Creative Commons Attribution-NoDerivatives 4.0 International License.

We are the statewide chapter of the Society for Conservation Biology. WSCB promotes the science and practice of conservation throughout Wisconsin through networking events, lectures, workshops, and outreach.